For Neefu’s birthday, I decided to make something a little special–birthday doughnuts. I didn’t really have much time, and not that much by way of ingredients, but I wanted her to wake up to something special, since she’s been helping K so much.

I also wanted it to be tasty, and yet at least semi-healthy, so I  made some substitutions: some whole wheat flour, agave syrup instead of sugar (I’m still not sold on fake sugar, though I’ve been trying–that aftertaste, yuck.  though maybe one day I’ll get there).

◊ modifications: agave syrup, changing the balance of wheat and AP flour, and adding in some almond flour too. oh and cocoa powder!

We’ve had these 3 boxes of mini filo tart shells in our freezer since April (I bought them to make something for K’s bday but he wanted to use another shell for what I made, so these just sat around). Yesterday was the perfect day to use them up–fruit was on sale. (yay, emptying freezer!)

I’m posting two versions–the method I actually used, and one I think might be easier. Why? I cooked the fruit with a bit of almond paste (no cream) first, and thought it was a little bland, so I made an almond cream, pulled the fruit out, piped it in, and replaced the fruit. This method tasted amazing, but was a bit tedious, and the fruit wasn’t bright (as it was when it was raw).

Our garden is going gangbusters. When I went the other day, the tomato plants were out of control, as was the basil and parsley. And there were 4 beautiful long eggplants. So I needed to make something with this stuff. Here’s what I came up with:

One food kept coming up as I browsed for menu items for our Fourth of July picnic on Friday: Fried Chicken. So, how was I going to make it vegetarian? And would it be good? I made up a recipe…based on some things I’ve done before…and my imagination. Well…the verdict is that it *was* good.

Here’s what we ended up having:

So here’s how to make veggie fried chikn. It’s shallow fried. This is one of the first times I’ve fried something in a long time.

Ok it’s been a LONG time since I’ve posted a recipe…It’s been a busy few months and these have been stacking up. In particular, this one is long overdue. It’s got a fair amount of cheese and eggs in it, so I wouldn’t call this an “everyday” dish. But on occasion it’s ok.

The base recipe: I modified this recipe, which is easier than most souffle recipes in that it uses xantham gum as a secret ingredient to keep the whites stiff longer. I modified it because it simply didn’t seem to have enough flavor. And I generally don’t have whole milk laying around. I also

found you can use less butter.

I serve this with a salad. or last night with marinated mushrooms, asparagus, and artichoke. 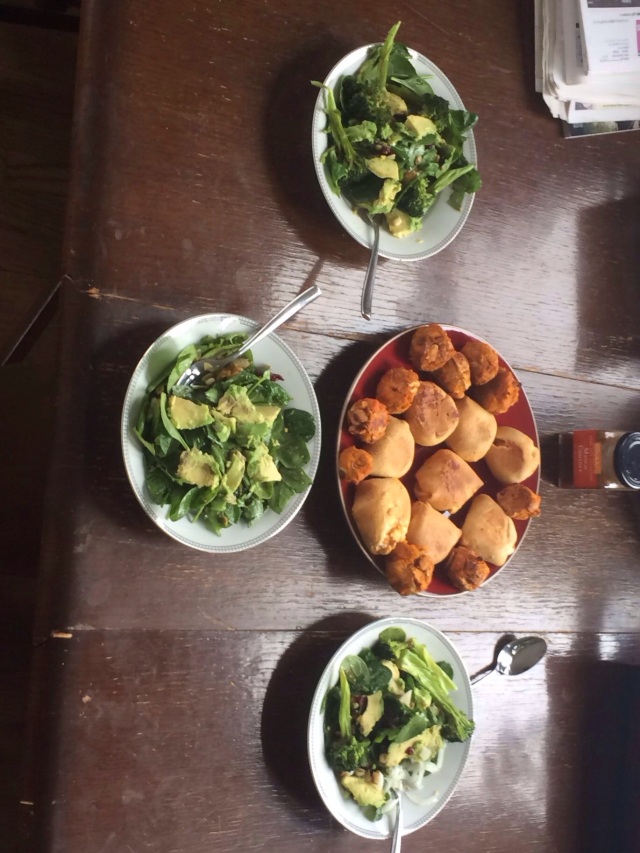 Unlike last year, this year’s superbowl foods edition (my first of 2014…whoops, January was a wee bit busy), isn’t actually superbowly/footbally food. As my husband said in his cute & adoring facebook page, “While I was at a bar watching the game, my  wife made 6 dishes…” (to be clear, he actually called me his sorceress wife…). Here are the fruits of that labor:

Garam masala with star anise is my new thing, and this ended up being a key flavoring in this daal. Why, not sure–it just adds a different and I think interesting flavor. And since I make garam masala every few weeks, it gives me a chance to experiment with proportions and ingredients.

I grew up with a version of this recipe. It works with kale & chard too. I just happened to have spinach

I originally started this thinking I’d add sweet potato or acorn squash to the mixture, but they didn’t cook fast enough so I left them out, but I leave you with that idea.

Serve in a pita with tahini, fresh tomatoes & other optional toppings (I like shredded carrot, cucumber, and cilantro too)

I found a recipe for a pizza crust using cauliflower a few months ago and have been experimenting with it ever since. This is also part of my “hidden veggie” series.  Here’s the latest recipe:

I recommend draining as much of the water out as possible to keep it moist.

Who needs pasta when you have a squash?

This one is a riff off of this recipe from food network.com

Yup, still using the pumpkin up. This one has a few steps–all easy.

Blend all of that together in a food processor.

Put it all into a bowl and mix up with the dressing.

Aah yes, more things to do with pumpkin, right? This one came from a local farm.

Pumpkin has 2 faces (this is the other side)

This is a quick one, once you have a pumpkin or a butternut squash or any other squash baked and ready to go (wrap in foil, toss in the oven at 450 for about 40 mins).

What do you do with a pumpkin once halloween is over? Cook it duh, right? Well this bad boy yielded 3 recipes.

I baked a cute little cake for an officemate’s babyshower last week. I had just gone apple picking with my girl scout troop and had 10 apples in the house, so naturally, it had to be an apple cake. It also was an experiment with whole wheat pastry flour. It worked out well–the cake was appley and moist. but not too sweet. the guest of honor said “how did you know I don’t like too-sweet frosting heavy cakes?!”

I started with a recipe I saw for another apple cake and futzed with it.

In my ongoing quest to figure out new things to do with brussels sprouts, I ran with a random idea: semi-indianize them. It means curry powder, cashews, ginger, and turmeric, but not the whole South Indian tempering mustard seed route.

This is a two-fer. One marinade, two dishes. Why is it Angry? I don’t know, ask Food & Wine Magazine, where I got the recipe. Its roots are in  a Korean recipe. I didn’t have the Korean chili paste or chili powder so I improvised.

Ok so I blog in fits & starts….I’m back! 🙂 This month I’ve been experimenting and have come up with some new, pretty tasty options….the first…cauliflower “Mac” & cheese.

It’s “mac” because there’s no macaroni. I started the recipe without the bread crumbs and the egg…but it was a little soupy and needed some body…so I made the addition. and it worked.

For those of you curious about the nutrition information:

Cooking with a Wallflower
WEAL FOOD

Uncover the Vegan within.

Vegan & Vegetarian recipes from around the world

Living well in the urban village

a whisk and a spoon